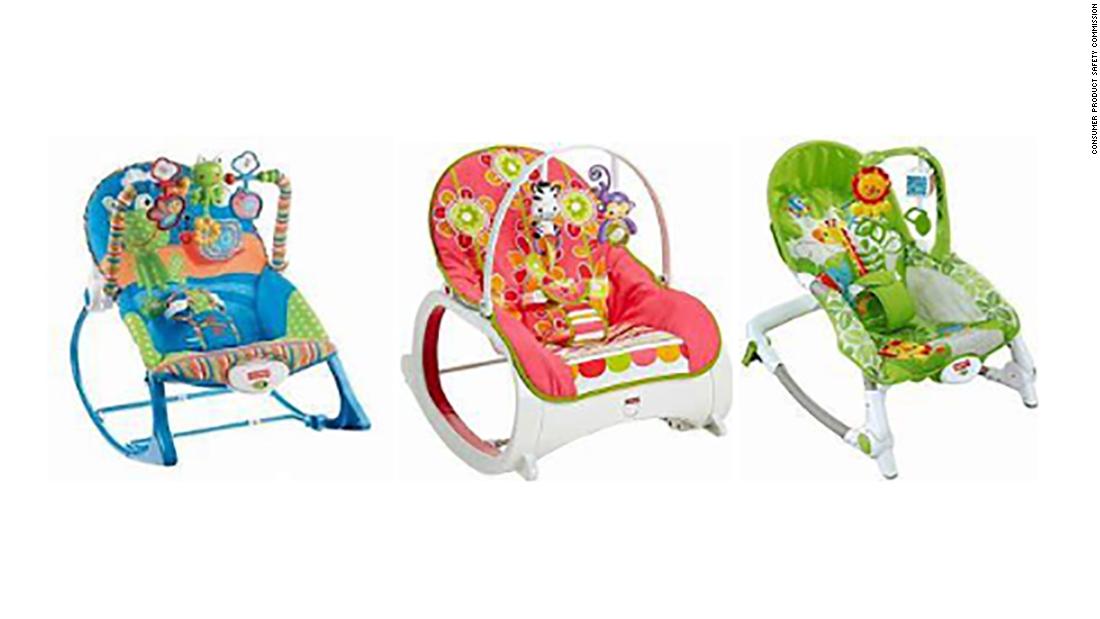 Health, Fitness & Food
Share on Facebook
Share on Twitter
Share on Pinterest
Share on LinkedIn
“Just three years ago, this agency oversaw the recall of the Fisher-Price Rock ‘n Play after a staggering number of infant deaths. Tragically, we now grieve 13 more infant deaths in Fisher Price Rockers,” CPSC commissioner Rich Trumka Jr. wrote in a statement.
Another infant died in 2019 while lying in the Kids 2 Bright Starts Rocker, the agency announced. Kids 2 encouraged consumers call 800-230-8190 or visit its website to report incidents or ask questions.
Infant rockers are designed to gently swing back and forth, thus providing a soothing, calming motion to relax babies. Other types of baby products that have an incline include baby bouncers, infant positioners and inclined sleepers, also know as baby nests, docks, pods, loungers, or nappers, according to the American Academy of Pediatrics.
“No inclined product, made by Fisher-Price or any other company, is safe for infant sleep. Only a firm, flat surface is safe,” Trumka said. He urged the public to report any incidents involving infant rockers to the CPSC at www.saferproducts.gov.
Fisher-Price also asked consumers to report any incidents to the company at 800-432-5437 and encouraged consumers to visit its Safe Start webpage for safety videos and tips.
Trumka said that the agency discovered the deaths more than two months ago but was unable to warn the public due to what he called a “gag rule,” which prohibits CPSC from communicating negative information about a product or company until the company has had a chance to respond.
Even though Fisher-Price cooperated, “we fought an uphill battle to release this information to warn parents and caregivers,” he said. “When CPSC needs to warn the public about a pattern of death and injury tied to a product, it should be able to quickly issue that warning to prevent further loss of life.”
“Congress must immediately repeal the Gag Rule,” Trumka added. “If CPSC cannot issue timely warnings, dangers will remain hidden in people’s homes.”
Teresa Murray, director of the Consumer Watchdog office of the United States Public Interest Research Group Education Fund, which calls itself an independent, non-partisan group dedicated to countering special interest groups, released the following statement:
“It makes me sick inside to think that babies may have died after authorities were investigating suspicious deaths involving rockers,” Murray said. “Commissioner Trumka is right: Congress should take action to revoke what the CPSC calls the ‘gag rule’ so regulators who want to protect us can do their jobs properly.”
No infant should be allowed to sleep or left unattended or unrestrained in inclined products, including rockers, gliders, soothers and swings due to the risk of suffocation, according to the CPSC.
“Infants who fall asleep in an inclined or upright position should be moved to a safe sleep environment with a firm, flat surface such as a crib, bassinet or play yard,” the agency stated. Only use a fitted sheet and never add blankets, pillows, padded crib bumpers, stuffed animals and toys, or other items. Always place a baby to sleep on his back.
“I also want to highlight the new rule on infant sleep products that will require that sleep products have a sleep surface angle of 10 degrees or less, and that all sleep products conform to the existing bassinet, crib, or play yard standard,” said Alexander Hoehn-Saric, chair of CPSC, in a statement.
“The rule goes into effect on June 23, and will be an important step to help parents and caregivers keep babies safer,” he added. “The CPSC will aggressively enforce the rule in order to protect the most vulnerable among us, our children.”
This article was originally published by Cnn.com. Read the original article here.
Share on Facebook
Share on Twitter
Share on Pinterest
Share on LinkedIn

What is rainbow fentanyl? Colorful pills drive new warnings about deadliest drug in the US
First real-world study shows the effectiveness of mRNA COVID-19 vaccines during pregnancy
Program in Global Surgery and Social Change
US States With ‘High’ Adult Obesity Rate Doubles; Is Yours One Of Them?
Uncontrolled BP Linked to One Third of ED Visits for CVD