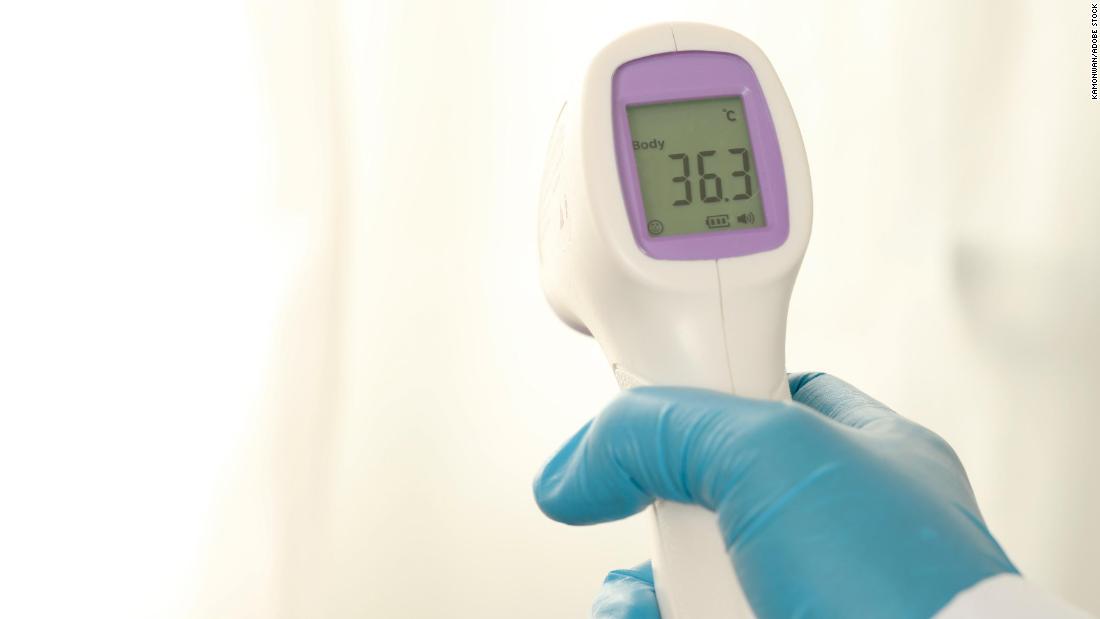 Health, Fitness & Food
Share on Facebook
Share on Twitter
Share on Pinterest
Share on LinkedIn
Undetected fevers could lead to delays in medical care, according to the study, published Tuesday in the medical journal JAMA.
Temporal thermometers grew in popularity during the pandemic, and this isn’t the first time that a medical tool important for evaluating Covid-19 patients has been found to not work as well as it should in Black patients.
Other studies have found that pulse oximeters — small devices that clamp onto a finger to monitor oxygen levels in the blood — may yield inaccurate readings among people of color.
“The finding of racial bias in one category of devices could have been an anomaly. The finding of bias in thermometers as well leads to the important question of what other medical devices or diagnostics could be failing our patients,” Dr. Sivasubramanium Bhavani, assistant professor in the Division of Pulmonology, Allergy, Critical Care and Sleep Medicine at the Emory University School of Medicine and first author of the JAMA study, wrote in an email to CNN.
The new research suggests that “23% of fevers in Black patients could go undetected with a temporal thermometer,” Bhavani wrote.
“If fevers are going undetected, then notifications are being missed, and these missed notification pathways could lead to delays in antibiotics and could lead to worse outcomes for Black patients,” he added. “In the outpatient and community setting, missed fevers could lead to delayed diagnosis, which could be especially important during surges of the pandemic. If schools, churches, and workplaces were using temporal thermometers to screen for fevers, this likely led to undetected fevers in a significant percentage of Black people.”

Doctors depend on accuracy

The researchers — from Emory University in Atlanta and the University of Hawaiʻi John A. Burns School of Medicine in Honolulu — examined the performance of temporal thermometers and oral thermometers in detecting fever among 2,031 Black and 2,344 White patients with infections. The patients were admitted to four Emory hospitals between 2014 and 2021. The researchers didn’t have an adequate sample size to evaluate whether there was inaccuracy in temporal measurements in Asian and Hispanic patients.
They found that the overall temporal temperature readings tended to be lower than the oral temperature readings in Black people but not in White people.
The prevalence of fever detected in the Black patients was 10.1% with the temporal thermometer, compared with 13.2% with the oral thermometer. But among White patients, the prevalence was 10.8% with temporal and 10.2% with oral.
The researchers wrote in their study that the difference in temporal versus oral thermometer readings among Black patients can lead to fevers going undetected more often — and subsequently, an illness could be misdiagnosed or even untreated.
Clinicians “depend on accurate temperature readings. We make so many decisions based on them — on whether to start someone on antibiotics, whether to admit them to the hospital, whether to do certain procedures or testing,” said Dr. Tom Valley, an assistant professor in the University of Michigan’s Division of Pulmonary and Critical Care, who treats patients in the intensive care unit at Michigan Medicine in Ann Arbor. He was not involved in the new research.
Valley has studied how pulse oximeters don’t work as well in measuring oxygen levels among people of color and said he is not surprised by the racial differences in the performance of temporal thermometers.
“As someone who has been involved in this work and has found something similar in a different diagnostic tool — pulse oximetry — unfortunately, I’m not surprised,” he said. “We don’t know whether these problems exist unless we look for them, and if we don’t look for them, we’re not going to identify these problems. If we don’t identify these problems, we can’t fix them, and so that’s part of the issue. We don’t know how far this goes. We don’t know how deep this goes, this racism within healthcare.”
In theory, any medical equipment that leverages infrared sensing in how it works “will likely show discordance in its performance across people with different skin tones,” said Dr. Leo Anthony Celi, clinical research director and principal research scientist at the MIT Laboratory for Computational Physiology, who was not involved in the new study.
That’s because the technology in such devices, like pulse oximeters and temporal thermometers, involves emitting and capturing light to make a measurement.
For instance, pulse oximeters send light through the finger to a sensor that uses the light to detect the color of your blood and gauge blood-oxygen levels. Temporal thermometers use infrared technology to measure the heat energy your body gives off. If a device isn’t calibrated for darker skin tones, the pigmentation could affect how the light is absorbed and how infrared technology works.
“Skin tone will interfere with the reflection of light,” said Celi, who has also studied disparities in pulse oximeters. “We think that this is just the tip of the iceberg. I suspect that over the next year, we will have an abundance of papers showing how there are products that are in use for care that are themselves not objectively accurate across different demographics.”

A ‘much bigger systemic problem’

These inaccuracies in how a device might perform in Black and brown patients are examples of why it’s important for research to be more inclusive and involve people of color in clinical trials for the design and evaluation of medical devices, Celi said.
“It’s not as simple as it sounds, though. Historically, it is more difficult to recruit people of color or underrepresented individuals to clinical trials because of the problems that we have seen in the past where they were abused,” he said.
But overall, “it really reflects the much bigger systemic problem that we have now in the way we design, we innovate, we develop health products — not just medical devices but also medications and interventions,” he said. “We really need to step up in terms of making sure that the research we perform is more inclusive so that we avoid these unintended consequences of the technology that we develop.”
The new study did not analyze the exact factors behind why these racial differences in the accuracy of temporal thermometers exist — it just found that they did.
“The way these thermometers work is by measuring radiation emitted from a large artery in the forehead. Several factors that are not completely characterize may impact the ability to detect and accurately measure that radiation. One such factor may be skin color,” Dr. Ashraf Fawzy, an assistant professor of medicine at Johns Hopkins Medicine, who was not involved in the new study, wrote in an email to CNN.
That could suggest that the technology behind temporal thermometers was not sufficiently tested among people with dark skin. These devices also “depend heavily” on the user performing the temperature measurement correctly, he said.
“It may be that users of the device are placing the thermometer in the wrong location more often on Black patients leading to inaccurate readings,” Fawzy wrote. “The findings are certainly surprising. Unlike pulse oximeters, it is generally well known that temporal thermometers are less accurate and reliable however I personally never considered that this inaccuracy may be different between Black and White patients.”
This article was originally published by Cnn.com. Read the original article here.
Share on Facebook
Share on Twitter
Share on Pinterest
Share on LinkedIn

New Treatment for Barretts-Mayo Clinic
US suicide rates rose in 2021, reversing two years of decline
New Gym Culture And Shocking Rise Of Body Dysmorphia
Adult ADHD: What comes next after a diagnosis and how can I prepare?
Have You Heard? OTC Hearing Aids