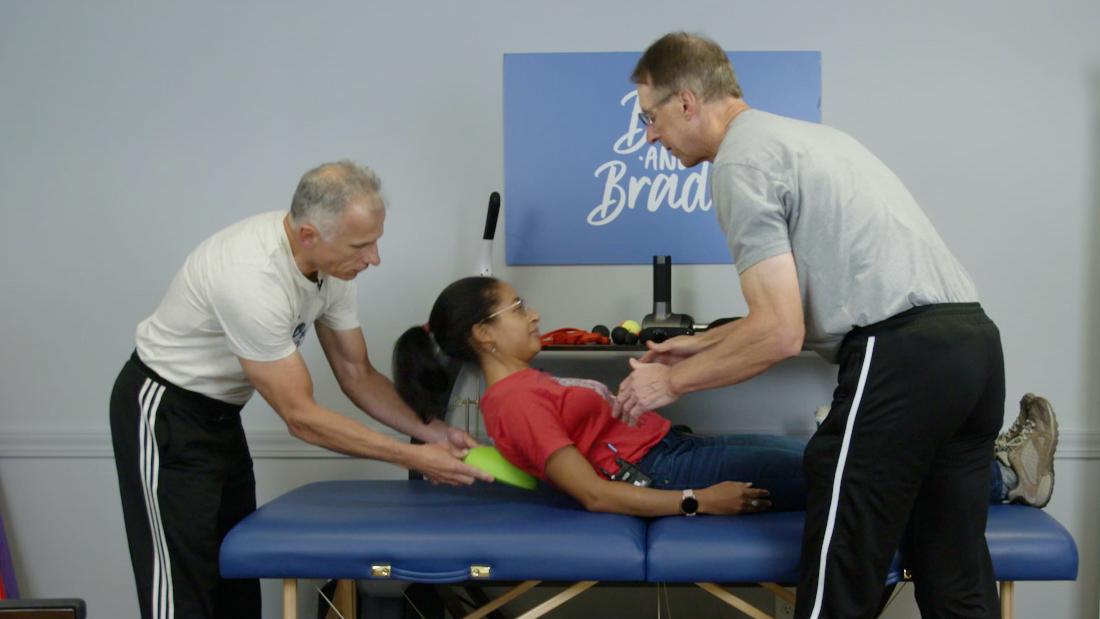 Health, Fitness & Food
Share on Facebook
Share on Twitter
Share on Pinterest
Share on LinkedIn
Living in New York City, I have seen many physical therapists, chiropractors and acupuncturists. But two funny Midwesterners I found on the internet have given me the most useful advice in two decades.
Bob Schrupp and Brad Heineck are physical therapists known simply as “Bob and Brad,” and they post pain relief videos on YouTube to more than 4 million subscribers. They have hundreds of thousands of social media followers, but I got to meet them in person after they offered to film a few demos.
My co-producer and I drove an hour through Minnesota cornfields and wind farms to find their unmarked studio in the town of Winona.
Walking in, we found two chatty guys who were immediately endearing. Schrupp started posting videos 10 years ago when he ran his own practice and wanted to offer patients exercises to follow at home.
“I remember being very surprised because I had written a blog at one time, and it got zero reads,” Schrupp said of his foray onto the Web. “And so, I put a video on YouTube, and within a day it had like 10 views, and I thought that was amazing!”
Heineck, who worked for Schrupp, joined in, and their friendship makes them standouts on a platform full of “pain experts.” They can shoot a video in 10 minutes in one take without a script. Every video starts with an off-key, ’80s-style jingle that claims, “Bob and Brad are the most famous physical therapists on the internet,” after which Heineck quickly quantifies, “Only in our opinion of course.”
They say their goal is to help ease suffering. In 2016, people in the US spent more money (an estimated $134.5 billion) on low back and neck pain than they did on 154 other conditions, including diabetes, hypertension and dementia, according to a study in the Journal of the American Medical Association.
“A lot of people don’t have insurance or are in an area where they can’t get to a doctor or a therapist,” Heineck said. “And they may need just some tidbit of information that’s going to lead them in the right direction.”
The two are asked about lower back pain and sciatica most often, followed by shoulder and knee pain, but I appreciated the video that helps massage away hand strain for the weary texter. For our visit, they filmed a video on sleep positions for the nocturnally challenged and then got straight to my chronic upper back pain.
Over a decade ago, I was diagnosed with kyphosis, a hunching of the upper spine. Lest you think I’m an amateur, I have hundreds of dollars’ worth of shoulder massagers, massage balls, freeze creams and heat wraps. I have my own transcutaneous electrical nerve stimulation (TENS) unit, and I have even sprung for a wrap that mimics someone massaging your shoulders. (It’s not the same.)

The advice I wish I’d learned long ago

First, Schrupp and Heineck asked me to lean back as far as I could, and they quickly noticed the muscles along my upper spine didn’t flex or budge — they were cement poles. In the video above, they demonstrate how to use a rubbery sphere called a back pod to loosen those trigger points. I’d long been leaning against small, hard sports balls to do the same, but sustained pressure from a wider surface loosened tension without adding soreness. For me, soreness always led to strain the next day.
Then came another demo, along with advice that’s helped me the most: “One of the things that we’re famous for is that we don’t want to have you do the exercise once a day,” Schrupp said. “To think that you’re going to make a big change by doing something once a day is unlikely. It’s more likely you’re going to make a change if you can do it like eight times a day or nine times a day and make it part of your habit.”
Schrupp said this idea isn’t original, and he’s quick to point out how much he talks to other experts, turning these conversations into a podcast.
I’d first seen this tip in action when I watched Schrupp doing chin tucks in a car with a rolled-up sock behind his head. He was working on his posture throughout the day.
I’d undergone physical therapy for years but told myself I had to do all the exercises right when I woke up, which of course I’d often skip. But doing a few things here and there throughout the day is more feasible, Schrupp and Heineck said, and releases more tension.

I realize the painfully bad posture I’ve built up for decades won’t go away in a few months. But these moments of relief give me hope. Moving every so often reminds the body of what it’s naturally supposed to do, all while bringing in blood flow and warming up muscles. I knew I was on to something when I heard CNN’s Brianna Keilar, who lives with fibromyalgia, offer the same advice.
Visits to my physical therapist are still key, and Schrupp and Heineck agree. It took me a while to find a good therapist. Mine gave me exercises I’d never tried before and pointed out that I’d been doing previous ones with my shoulders too high for far too long. I’m not sure I could have gotten that insight from the internet.
But when I leave the therapy office, I have my Reddit channels, yoga routines and “Bob and Brad” at my fingertips.
“I think a lot of our followers, our subscribers, are people who are active, and they’re looking for education,” Heineck said. “And when you have control over your body as far as controlling the pain, that’s very powerful.”
This article was originally published by Cnn.com. Read the original article here.
Share on Facebook
Share on Twitter
Share on Pinterest
Share on LinkedIn