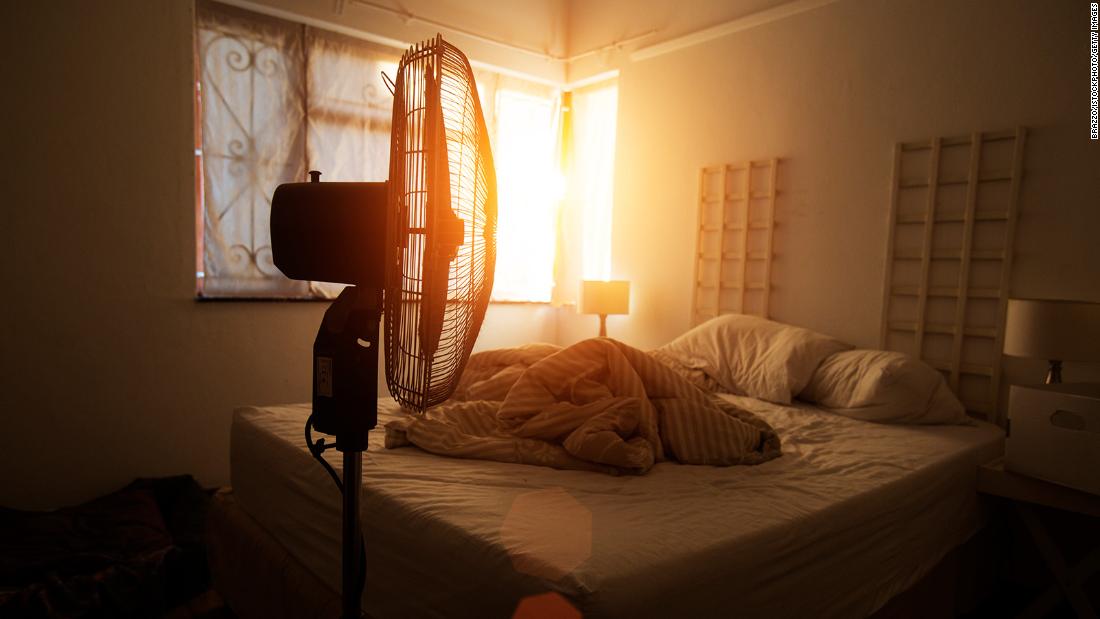 Health, Fitness & Food
Share on Facebook
Share on Twitter
Share on Pinterest
Share on LinkedIn
Sign up for the Sleep, But Better newsletter series. Our seven-part guide has helpful hints to achieve better sleep.
In California, temperatures in the 110’s (Fahrenheit) are setting records and pushing the state’s electrical power grid to a breaking point. In the United Kingdom and Europe, recurring heat waves are baking both residents and tourists, sparking wildfires and fostering drought — at the same time that Europe is suffering energy shortages due to Russia’s restrictions on the delivery of natural gas to the region.
Many homes and hotels in the region do not have air conditioning, leaving people unused to extreme heat unsure of how to cope. Historically, there was no need for central air in much of the UK and the rest of Europe — high temperatures were not the norm. That may be permanently changing, according to a recent analysis that predicted severe temperatures in the region will become the norm by 2035.
It’s not just the unbearable sunshine — temperatures at night aren’t dropping as they should either. A February study found that the type of cool, damp nights needed to help to bring wildfires under control are disappearing: There was a 36% average yearly increase in “flammable” nights in the years between 1979 and 2003.

“Sleep is a vital function necessary for adaptive physical and mental wellbeing,” according to a review published Thursday in the Journal of Sleep Research, which touches on the health impact of sleeping in warmer temperatures and gives tips on how to cope.
To get the best quality sleep, experts have long recommended sleeping in a cool room — between 60 and 67 degrees Fahrenheit (15.6 to 19.4 degrees Celsius) is best. What happens when you can’t achieve that during a heat wave?
Studies have shown higher nighttime temperatures increase wakefulness and reduce deep wave and REM (rapid eye movement), both critical to how well the body repairs and refreshes itself at night.
Exposure to heat waves during pregnancy may be associated with adverse outcomes such as preterm birth, according to a 2019 study. Older adults may have higher heart rates and more physiological stress when sleeping in warmer temperatures. A 2008 Australian study even found deaths due to mental and behavioral disorders rose during heat waves, especially for older adults.

Tips for sleeping in the heat

If we learn how to better deal with sleep problems during heat waves, we might be able to limit the negative impact on our health, according to a team of experts from the European Insomnia Network, who authored the review.
Here are some of the top tips from the review, along with suggestions from sleep experts in the United States who were not involved with the publication.
1) Stay hydrated. Drinking plenty of water during the day can help your body better regulate your temperature at night.
But don’t drink for the hour or two before bed, or you’ll end up waking yourself in the night to go to the bathroom, said sleep specialist Dr. Raj Dasgupta, an associate professor of clinical medicine at the Keck School of Medicine at the University of Southern California. Instead, “try sucking on ice cubes before bed.”
Eating lighter meals during the day may help as well, said Dr. Phyllis Zee, chief of sleep medicine and professor of neurology at Northwestern University Feinberg School of Medicine in Chicago.
2) Choose loose, cotton clothing — avoid synthetics, which can trap heat next to the skin.
3) If you’re lucky enough to have a cooler period during the day, open windows and doors and start up fans to ventilate the bedroom, then close it off when the temperature rises.
4) If there are no breaks from the heat, close blinds, pull window shades, and do what you can “to keep the house and bedroom as cool and dark as possible both during day and night,” the review suggested.
5) Avoid alcohol in the evening — it dehydrates the body and sets you up for nighttime sweats.
6) For you and your child, set aside an hour or more before bedtime for calming activities, such as “reading a book, listening to a story or to music. This could help in cooling down and relaxing,” the review added.
7) Before you hit that hot sack, take a lukewarm or cool (but not cold) shower or foot bath, which may help to reduce your heat stress and set you up for sleep. How does that happen?
“Your body temperature lowers after you leave the shower or bath as your body adapts to the cooler environment,” Dasputa said. “This drop in temperature prepares your body for sleep because our body temperature has a natural circadian rhythm — the body is primed to cool down when you lay down and warm up when you get up.”
8) Try your best to keep your bedroom under 77 degrees Fahrenheit (25 degrees Celsius) if you can. To do so, try using ceiling fans or floor or bedside electric fans, which use “up to 50-times less electricity” than air conditioning,” the review noted.
“There are also fairly inexpensive ice cooling fans that can be placed near the bed,” Zee said in an email. “If you’re unable to keep the bedroom cool, sleeping temporarily on lower floors like the basement (if there is one) will be cooler.”
Tips aside, the health impact on people who are used to temperate climates has not been robustly researched, said psychiatrist Dr. Bhanu Prakash Kolla, a sleep medicine specialist in the Center for Sleep Medicine at the Mayo Clinic in Rochester, Minnesota.
Studying people who live in hot countries and have adapted to the hot climate would be helpful as well, Kolla said: “There is no evidence that they have greater rates of insomnia or other sleep disruption or in fact sleep poorly. Therefore it is quite likely that we can learn many things about the adaptive measures used by these cultures that have lived in much hotter climates for many centuries.”
This article was originally published by Cnn.com. Read the original article here.
Share on Facebook
Share on Twitter
Share on Pinterest
Share on LinkedIn

How to manage your finances during the holidays
Street Medicine; Folic Acid for Suicidality; and Malaria Vaccines
New Gym Culture And Shocking Rise Of Body Dysmorphia
Hesitancy to vaccinate children associated with misinformation about vaccine safety
The power of dyslexic thinking