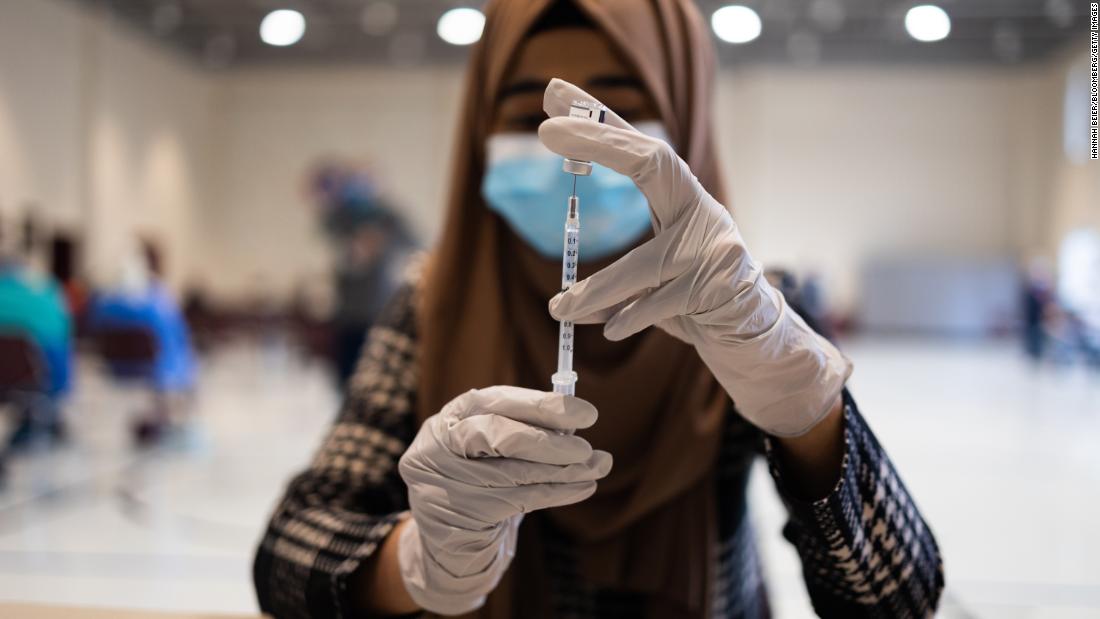 Health, Fitness & Food
Share on Facebook
Share on Twitter
Share on Pinterest
Share on LinkedIn
Millions of people were lining up daily to get their shots. Instead of the steady drumbeat of cases, hospitalizations and deaths, we were tracking a new number: the percentage of Americans who had been vaccinated. This number, we believed, was our best chance to beat the virus.
The US was caught up in a fever dream of reaching herd immunity, a threshold we might cross where vulnerable individuals — including those too young to be vaccinated or those who didn’t respond well to the vaccines — might be protected anyway because, as a community, we would weave an invisible safety net around them.
With herd immunity, if someone does get infected by a virus, they are surrounded by enough people who are shielded against infection that the virus has nowhere to go. It fails to spread.
As a country, we had reached this point against some formidable viruses, such as rubella and measles. We thought we could get there with Covid-19. We were probably wrong.
“The concept of classical herd immunity may not apply to Covid-19,” Dr. Anthony Fauci, director of the National Institutes of Allergy and Infectious Diseases, said in an interview with CNN.
And that “means we’re not going to be without SARS-CoV-2 in the population for a considerable period of time,” said Fauci, who recently co-authored a paper on herd immunity for the Journal of Infectious Diseases.

How we beat measles

Fauci points to measles as an ideal case study in herd immunity.
Like the virus that causes Covid-19, the measles virus spreads through the air. It is so contagious that if one person has it, 9 out of 10 people around them will catch it if they are not immune to it, according to the CDC. Some experts have estimated that the Omicron viruses are as contagious as the measles.
The US eliminated transmission of measles and has successfully kept the virus from circulating in this country because of three things: an extremely effective vaccine; a virus that doesn’t change, or mutate, in significant ways over time; and a successful childhood vaccination campaign.
The measles vaccine is 97% effective at preventing the disease, according to the CDC. Once a person is vaccinated, studies have determined that protection lasts virtually their whole lives.
Many states in the US had once reached an ambitious public health goal of getting more than 90% of their children vaccinated against the disease by the time they started kindergarten.
This high level of vaccination coverage, the durability and effectiveness of the vaccine, and the relative stability of the virus have helped the United States prevent major outbreaks of the disease for more than 20 years.
Still, herd immunity has to extend beyond the borders of the United States. Each year, a certain number of cases arise when travelers bring it into the country, but it has never regained a foothold here and continued to circulate, because we have community-level protection against it.
Elimination of the virus isn’t infallible. In the United States, herd immunity against measles is wearing thin in many parts of the US — and indeed around the world — because of vaccine hesitancy.
The World Health Organization warned in 2019 that measles could become endemic again around the world as more people refuse their shots.

Covid-19, unfortunately, isn’t playing by those same rules.
“Bad news number one,” said Fauci, is that the coronavirus that causes Covid-19 changes a lot and in significant ways.
“We’ve already experienced over a period of two years that we’ve had five separate variants Alpha, Beta, Delta, Omicron. And now BA.2 from Omicron one,” he said.
“Bad news number two is that there’s a lack of a wide acceptance of safe and effective vaccines,” Fauci said. Put simply, not enough people have been vaccinated.
The more contagious the virus, the more people have to be vaccinated to stop it from ripping through a community, according to Dr. Adam Kucharski, co-director of the Center for Epidemic Preparedness and Response at the London School of Hygiene and Tropical Medicine. In a July 2021 Twitter thread and in a recent interview with CNN, Kucharski explained how expectations around herd immunity have to shift as viruses become more contagious.
Kucharski estimated that for a virus as contagious as the Delta variant, 98% of the population would need to be vaccinated if the vaccines we have could prevent 85% of transmission of the virus.
If the vaccines didn’t prevent transmission to that extent, he said, then herd immunity probably wouldn’t be possible with the vaccines we currently have.
In a May 2021 paper on the same theme published in the journal Eurosurveillance, Kucharski and his co-authors explain that much of herd immunity also depends on how well the vaccines prevent transmission — the act of an infected person passing the virus to someone else.
Vaccines that prevent transmission are said to convey sterilizing immunity. The measles vaccine creates sterilizing immunity. The Covid-19 vaccines do not. While vaccination reduces the chances that you might pass Covid-19 to someone else, contact tracing studies have shown it still happens.
If not enough people get vaccinated — which has to be virtually the entire population for highly contagious variants — or the vaccines we have don’t stop nearly all transmission, we may not be able to reach herd immunity for Covid-19 until most people have developed immunity after getting the infection, Kucharski wrote in the article.
There are other factors to take into account, too, such as the durability of immunity over time.
“Not only is vaccine induced immunity not lifelong, but infection induced immunity is not lifelong,” Fauci said, which means we’re going to need repeated exposures to either vaccines or infection to keep our defenses up to speed.

Some are not ready to completely give up on the idea, however.
Barry Bloom is an emeritus professor of public health at Harvard University. He says one way to get there would be to make better vaccines.
Companies are working on vaccines that would target more stable regions of the virus, including the stem of the spike protein, that doesn’t appear to mutate as much. That might create more durable immunity that could stand up to to the shape-shifting of the viruses’ variants.
There are also promising nasal spray vaccines that may help develop antibodies in nose and throat. The hope is that these vaccines may generate immunity in the tissues its most needed to create the kind of sterilizing immunity that prevents transmission.
If not a vaccine in a nasal spray, Bloom says, why not put monoclonal antibodies in a spray you could take daily before leaving home to prevent transmission of the virus?
“And the question is are they good enough to wipe it [the virus] out before they’re asymptomatically transmitted? Or is it a constant game that we’re going to have to live with?” Bloom said in an interview with CNN.
Or, Bloom says, maybe the best we can expect is an assist from evolution. He says the virus is changing to become more contagious over time, but not necessarily to cause more serious disease. Ultimately, killing a person doesn’t do the virus much good. It needs hosts. It would be much better for the virus to evolve to become as contagious as it can be, but maybe with less propensity for causing severe disease.
Bloom thinks this is probably what happened to the coronaviruses that now cause common colds. He thinks they probably once started as fierce predators but evolved over time to just be pests.
That way, they get to live on, but so do we.
This article was originally published by Cnn.com. Read the original article here.
Share on Facebook
Share on Twitter
Share on Pinterest
Share on LinkedIn

Clean Living Linked to Lower Mortality in Former Smokers
Hormones in body fluid homestasis (ADH/vasopressin, Aldosterone and Natriuretic peptides)
COVID-19 Associated With Increase In New Diagnoses Of Type 1 Diabetes In Youth, By As Much As 72%
Asthma – signs and symptoms, pathophysiology
Rheumatoid arthritis drug can reduce the risk of deterioration in myasthenia gravis