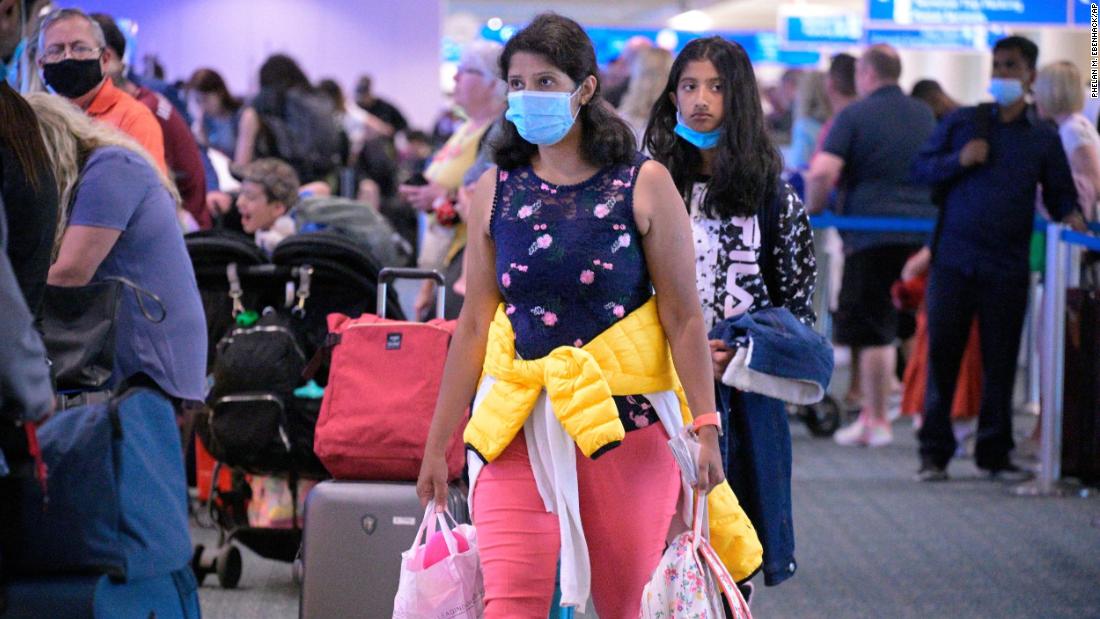 (CNN) — Jessie Festa was seated on an Alaska Airlines flight at Seattle-Tacoma International Airport waiting to take off for Pasco, Washington, when a flight attendant announced wearing masks during the flight was no longer required.

“The reaction around me was jubilation,” Festa, a travel blogger who lives in New York City, wrote via email. “Everyone started cheering and ripping off their masks.”

Festa, 35, said she initially removed hers, too, “as the exciting feeling was almost contagious.” Then she slipped it back on.

Word spread like wildfire among travelers on Monday after a federal judge in Florida struck down the federal mandate for wearing masks in airports, on domestic flights and on other forms of public transportation. The US Justice Department appealed the ruling on Wednesday following a recommendation by the US Centers for Disease Control and Prevention.

Before mask use became widespread on airplanes and in other places during the pandemic, Festa said, she always became sick after flying — either getting a sinus infection or swollen lymph nodes. Since she started flying with a mask over her nose and mouth, Festa noticed she hasn’t been sick once.

“The ability to enjoy my trips without feeling ill majorly outweighs the slight discomfort of having cloth on my face,” Festa said. She plans to continue masking on future flights.

More reasons to keep that mask on

Travelers thinking along those same lines in the wake of the mandate’s lifting are on to something, said infectious disease expert Dr. William Schaffner, a professor of preventive medicine and infectious diseases at Vanderbilt University Medical Center in Nashville, Tennessee.

Masks, when worn properly and consistently, reduce the risk of transmitting and catching the virus that causes Covid-19 as well as other respiratory viruses, including common colds and influenza, he said.

“Masks can both impede the spread of the viruses from me to you, and they can also protect me from you,” Schaffner said. That includes the viruses that cause the common cold.

Some people continue to wear face masks this week such as these travelers at Orlando International Airport.

While stories of people taking a flight and coming down with a cold immediately afterward are mostly anecdotes, Schaffner said it’s no surprise when people get a cold two days after sitting next to someone who was coughing and sneezing on a plane.

Wearing a mask will “reduce the number of colds as well as influenza and Covid viruses that we can pick up when we’re indoors in any exposed spaces, in close proximity to other people,” he said.

For frequent flier Benét J. Wilson, 58, who works for The Points Guy travel website, a noticeable reduction in her allergies — in addition to fewer colds — will keep her masking on planes, among other public areas, for the foreseeable future.

“I’m allergic to dust and pollen. My allergies were especially bad on airlines with cloth seats,” she said. “I firmly believe that my N95 mask kept me safe from irritants on planes that would cause my allergies to flare up.”

Dr. Robert Murphy, a professor of infectious diseases and executive director of the Robert J. Havey, MD Institute for Global Health at Northwestern University Feinberg School of Medicine, said that “masks filter many pathogens and allergens.”

In addition to helping protect against Covid-19, influenza and respiratory pathogens, masks can also help prevent the spread of such viral pathogens as rhinovirus, adenovirus and respiratory syncytial virus, Murphy said.

Should we keep masking on the ground?

A cancer survivor from St. Paul, Minnesota, with a compromised immune system, Jessica Kubis said she used to get sick every time she flew. “But since wearing a mask in the airport and the plane, I haven’t been,” Kubis said. “It’s been glorious.

Kubis, 43, said she also attributes her improved general health to no longer working in an office environment where people come to work sick and pass illnesses around the office.

Kubis continues to mask on planes — and at the gym, inside stores, concert venues and in restaurants outside of her table — to protect herself and others.

Immunocompromised people and those with underlying medical conditions and those who live with someone who is vulnerable “should choose to mask if they want to keep avoiding the coronavirus,” CNN Medical Analyst Dr. Leana Wen said.

Planes are relatively low-risk when it comes to Covid-19 transmission because of the high degree of air flow and high-quality ventilation on board, except during boarding and deplaning, when there isn’t good ventilation. But Wen is more concerned about buses and subways that may not have as good a ventilation “and where masks may no longer be required.”

Some flight attendants are relieved

Philadelphia-based flight attendants Rich Henderson and Andrew Kothlow of the blog Two Guys on a Plane felt a “huge sense of relief” with the mask mandate’s lifting this week.

Flight attendants Andrew Kothlow, left, and Rich Henderson are glad they’re no longer the face of the mask mandate.

“Some of the worst interactions we’ve ever had with passengers have been over enforcing the mask policy,” Henderson told CNN. “It doesn’t matter how nice you are to passengers about the mask policy either as there are some folks who come on board looking to fight.”

Their roles, Kothlow said, went from being “about aviation safety and travel to being the face of mask mandates.”

“Now that wearing a mask is a personal choice, that added tension in the air has been lifted,” he said. Henderson and Kothlow said they’ll keep masking in flight, with Henderson wearing a surgical mask and Kothlow a KN95 one. (N95 and KN95 masks offer greater protection than cloth or surgical ones, according to the CDC.)

“Before Covid, I usually got a cold about twice a year,” Henderson said. “Wearing a mask has prevented me from getting sick at all, so I’m more than happy to continue wearing one, especially on airplanes.”

Moving forward in the new normal

Sean Harris, 39, a communications and events professional in San Francisco, said that while the end of the mask mandate didn’t surprise him, he wished it had been handled differently.

“This should have been communicated to the public in advance, with an opportunity for those who are immunocompromised, with unvaccinated children, etc. to re-book or cancel without any penalty,” he wrote to CNN. “It should not have been done via PA announcement mid-flight.”

Harris has had fewer colds since he’s been masking, but his decision to continue wearing a mask in crowded places and on an upcoming flight to his husband’s native Germany is about protecting himself and others.

“Given that we’ll be interacting with families, friends and the general public who have pre-existing conditions and other risk factors that make them more susceptible to Covid-19, we’re choosing to wear masks on our upcoming trip,” he said.

Not catching colds and other diseases has its benefits.

“I think many people want to continue to mask in order to reduce their likelihood of contracting different diseases,” Wen said. “Masking should be something that’s allowed, encouraged and recommended, especially for vulnerable people but for anyone who wants to keep doing it.”

Schaffner predicted that some people may turn to masking again in future winters and flu seasons now that they have a positive association with its effects.

Study Confirms Link Between COVID-19 Vaccination And Increased Menstrual Cycle Length
New targeted lung cancer screening programme on the horizon
How to manage your finances during the holidays
What Caused Left-Sided Hearing Loss in This 65-Year-Old Man?
Structural analysis of monkeypox virus to guide the development of broad antiviral agents