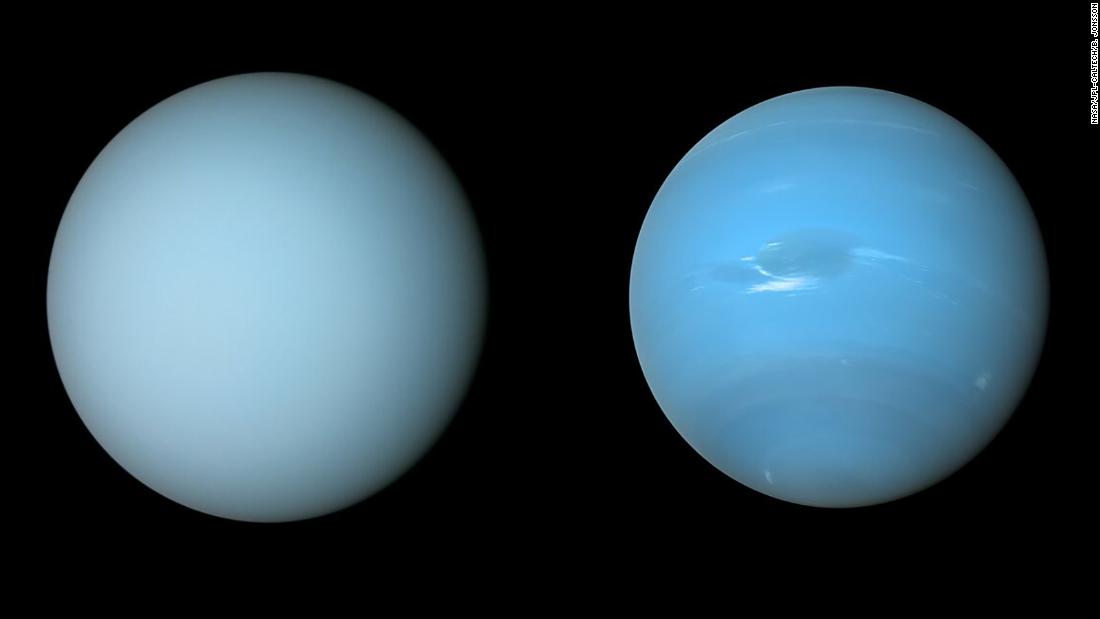 Health, Fitness & Food
Share on Facebook
Share on Twitter
Share on Pinterest
Share on LinkedIn
Sign up for CNN’s Wonder Theory science newsletter. Explore the universe with news on fascinating discoveries, scientific advancements and more.
New space and ground-based telescope observations have revealed what’s behind this difference in tone.
The most distant planets from the sun in our solar system, Neptune and Uranus have similar sizes, masses and atmospheric conditions. Looking at the the two planets side by side, which was made possible after NASA’s Voyager 2 spacecraft flew by them in the 1980s, Neptune has a bright blue appearance. Uranus is a paler shade of cyan blue.
Astronomers used the Gemini North telescope and NASA Infrared Telescope Facility, both in Hawaii, and the Hubble Space Telescope to create a model that could match up observations of Neptune and Uranus.
The scientists determined that an excess of haze builds up in Uranus’ atmosphere, which gives it a lighter appearance. This haze is thicker on Uranus than a similar atmospheric layer on Neptune, so it whitens the appearance of Uranus from our perspective.
Without this haze in either planetary atmosphere, astronomers believe both planets would be almost identically blue. A study detailing the findings published Tuesday in the Journal of Geophysical Research: Planets.
Previous attempts to understand this difference were focused on the upper planetary atmospheres at specific wavelengths of light.
“This is the first model to simultaneously fit observations of reflected sunlight from ultraviolet to near-infrared wavelengths,” said lead study author Patrick Irwin, professor of planetary physics at Oxford University, in a statement. “It’s also the first to explain the difference in visible color between Uranus and Neptune.”
The model also probed deeper atmospheric layers that include haze particles, in addition to clouds of methane and hydrogen sulfide ices.
New observations from the Gemini North telescope, located near the summit of Mauna Kea in Hawaii, were paired with other archival telescope data. The team analyzed three layers of aerosols at different heights on Uranus and Neptune. The middle layer of haze particles is what impacts the color the most.
On both planets, the middle layer is where methane ice turns into methane snow showers. Neptune has a turbulent atmosphere that is more active than Uranus’ slow, sluggish one, so the methane particles and snow showers prevent a haze from building up on Neptune.
Scientists believe this model could also help explain why dark spots appear on Neptune, but are less common on Uranus. It’s likely due to the fact that the deepest atmospheric layer darkens, which would be more visible on Neptune.
“We hoped that developing this model would help us understand clouds and hazes in the ice giant atmospheres,” said study coauthor Mike Wong, an astronomer at the University of California, Berkeley, in a statement. “Explaining the difference in color between Uranus and Neptune was an unexpected bonus!”
We could learn more about these mysterious worlds, which have only ever been visited by Voyager 2 during quick flybys.
The planetary decadal survey, published in April, recommended the first dedicated Uranus Orbiter and Probe as the next large NASA mission. The authors of the report see the Uranus Orbiter and Probe as a way of revolutionizing the knowledge astronomers have of ice giants.
This article was originally published by Cnn.com. Read the original article here.
Share on Facebook
Share on Twitter
Share on Pinterest
Share on LinkedIn

SMART-CHOICE 3-Year Results Support Dropping Aspirin After PCI
What I Wish I Knew Before I Became a Doctor
Novel peanut-specific human IgE monoclonal antibodies may uncover new therapeutic targets for peanut allergy
US suicide rates rose in 2021, reversing two years of decline
Is it safe to breastfeed after the COVID-19 mRNA vaccination?