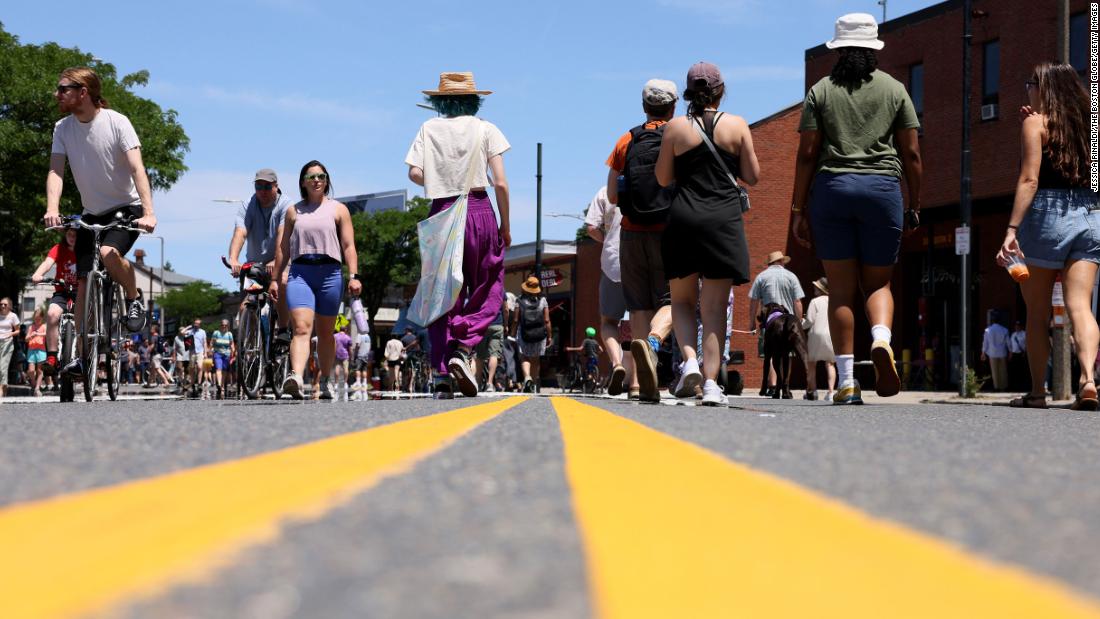 Health, Fitness & Food
Share on Facebook
Share on Twitter
Share on Pinterest
Share on LinkedIn
According to provisional data published Wednesday by the US Centers for Disease Control and Prevention, life expectancy at birth dropped by nearly a year between 2020 and 2021 — and by more than two and a half years overall since the start of the Covid-19 pandemic.
Life expectancy at birth fell to 76.1 years, the lowest it has been in the US since 1996, and the biggest 2-year decline in a century.
Covid-19 was the driving factor, with deaths from the virus contributing to half of the decline from 2020 to 2021, according to the report from the CDC’s National Center for Health Statistics.
The death rate from Covid-19 was higher in 2021 than it was in 2020, so it wasn’t particularly surprising that life expectancy would fall again, Bob Anderson, chief mortality statistician for the CDC, told CNN.
Also, drug overdose deaths reached a record high in 2021, killing about 109,000 people. And deaths from unintentional injuries — about half of which are due to drug overdose — was the second-leading cause of the decline in life expectancy.
Dr. Nora Volkow, director of the National Institute on Drug Abuse, also said it wasn’t surprising, but it is frustrating.
“It is distressing to see a continuing negative impact of drug overdose on the life expectancy of Americans. These deaths often occur in young adults and therefore represent a tragically high number of years of life lost and devastating impact on individuals, families, and communities,” she said. “We have the science and the tools available to help us reverse this trend and reduce the number of overdose deaths in this country. But these tools are not being used effectively.”
Even if expected, the scale of the decline is still extraordinary. In 2021, mortality rates due to influenza and pneumonia decreased, and if not for these “offsetting effects,” the decline in US life expectancy would have been even greater, according to the report.
“Mortality generally, mainly since the 1950s, has changed rather slowly,” Anderson said. Changes of more than a few tenths of a year have been considered substantial.

The recent decline among American Indian and Alaska Native people is particularly “astounding,” Anderson said.
The life expectancy for this group plunged by nearly 2 years between 2020 and 2021 and a startling 6.6 years since 2019 — more than twice as much as it did for the total US population.
At 65.2 years, the life expectancy for American Indians in 2021 was equal to the overall US life expectancy in 1944.
“When I saw that, in the report, I just — my jaw dropped,” Anderson said.
“It was hard enough to fathom a 2.7 year decline over 2 years overall. But then to see a 6.6 year decline for the American Indian population — it just shows the substantial impact that the pandemic has had on that population.”
Deaths from Covid-19 directly were the leading contributor to the decline in life expectancy among American Indian people in 2021, but deaths due to drug overdose and other unintentional injuries, as well as chronic liver disease, which is often caused by alcohol abuse, were nearly equal contributors for this group.
When it comes to the pandemic, Anderson said, “I’m not just talking about Covid-19 necessarily, but also the other factors that seem to have increased during the pandemic.”
Experts say the pandemic exacerbated already existing disparities for American Indians and others.
Dr. Matthew Clark, a chief medical officer with the Indian Health Service, said the findings of the new CDC report are concerning, but it has been known that American Indian and Alaska Native people “suffer disproportionately with regard to health outcomes for a broad variety of conditions.”
There are “unique aspects to addressing health outcomes” in these communities, he said, and this data should be viewed as a “call to action, an opportunity to redouble our efforts” to address a broad range of factors that impact the health of these populations and engage with tribal communities to find solutions.
“Even in the midst of a very concerning report like this, I do think that there’s hope,” Clark said, and “there is an opportunity to move the needle in the other direction.”
To do that, the goal should be to explore the root causes of those disparities for American Indians and others, said Ruben Cantu, an associate program director with Prevention Institute, a nonprofit focused on health equity.
“A lot of the talk is going to be around the pandemic,” Cantu said. “But we need to think about what has driven the conditions that have allowed certain communities to be more vulnerable” in the first place, like crowded housing, poor access to health care and low-income jobs that don’t allow for paid sick leave.
A separate study, published as a preprint in June, found that the decrease in life expectancy in the US over the course of the pandemic was “highly racialized” and substantially larger than it was for a set of comparable countries. In fact, that study found that life expectancy increased slightly between 2020 and 2021 for the set of 21 peer countries.

The new data from the CDC highlights differences in life-expectancy trends by race and ethnicity, as well as by gender.
In the first year of the Covid-19 pandemic, life expectancy declined least among White people. In the second year of the pandemic, however, this group saw the second-biggest decline in life expectancy — and deaths due to Covid-19 contributed to the drop among White people more than any other racial or ethnic group.
Once the most vaccinated group, the share of the White population that is fully vaccinated with their initial series now lags behind that of the Black, Hispanic and Asian populations, CDC data shows.
Life expectancy in 2021 was highest among both Asian women (85.6 years) and men (81.2 years), the CDC data shows. Hispanic women were the only other group with a life expectancy greater than 80 years.
In the total US population, life expectancy fell more among men than among women in 2021, widening a gap that has been growing over the past decade. The disparity in life expectancy between men (73.2 years) and women (79.1 years) is now nearly six years.
The life expectancy for American Indian men in 2021 was 61.5 years, lower than any other group. Black men had the next lowest, at 66.7 years.
A recent project by the Prevention Institute focused on the mental health and well-being of men and boys. It found that men and boys of color — especially Black and Native American men — “start out with higher rates of trauma and mental health challenges,” Cantu said, which can make them more vulnerable to other conditions.
“Over the last five or six years, we’ve heard a lot more about diseases of despair — things like substance use, alcoholism and suicide — and a lot of those things are connected,” he said. “It helps to point out how vulnerable certain communities can be to a lot of other conditions.”
This article was originally published by Cnn.com. Read the original article here.
Share on Facebook
Share on Twitter
Share on Pinterest
Share on LinkedIn

Exploring neurodevelopment among Zika virus-exposed children without Zika syndrome
Fauci says China has done a bad job of vaccinating the elderly and their shots are not very effective against Covid
Science Matters with James Chou
CDC encourages people to wear masks to help prevent spread of Covid, flu and RSV over the holidays
Breaking the silence: when cancer steals your voice