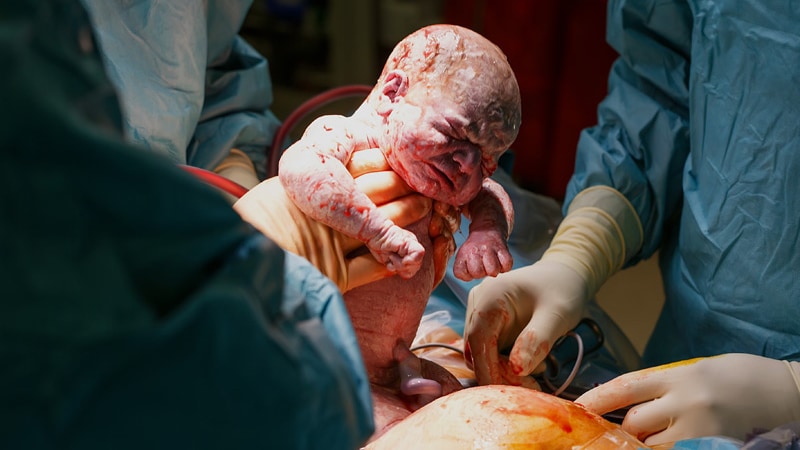 Advanced maternal age and maternal hypertension are a one-two punch that boosts the risk of cesarean births, a new study reports.

While the findings presented at the 2022 annual clinical and scientific meeting of the American College of Obstetricians and Gynecologists aren’t surprising, the insight they provide can be helpful in counseling women at risk about delivery options, lead author and Loma Linda (Calif.) University maternal-fetal medicine physician Sarah D. Smithson, DO, said in an interview.

The prospect of a cesarean birth “can be introduced early and often, which can be important in managing expectations,” she said, especially since women can feel depression and a sense of failure if it turns out they can’t give birth vaginally as they anticipated.

As Smithson noted, there’s a continuum of maternal hypertension conditions from less severe to more severe. The physicians need to hurry delivery along in the most severe cases. “The clock is clicking when you have preeclampsia, and you do not have time for an induction that could take 2-3 days if you’re having a hard time controlling blood pressure. You may consider cesarean to expedite delivery,” she said.

“We aim to get our cesarean section rates below 20%,” Smithson said. “These are high rates, and the fact that they’re significantly higher in the advanced maternal age group is compelling.”

The cesarean rates were higher at a statistically significant rate in patients with gestational hypertension (37% in older women vs. 26% in younger women; P = .021) and in those with preeclampsia with severe features (57% vs. 44%, respectively; P = .02). However, the differences were not statistically significant in the groups with chronic hypertension and preeclampsia without severe features.

In an interview, maternal-fetal medicine specialist Alex C. Vidaeff, MD, MPH, of Baylor College of Medicine, Houston, questioned the usefulness of the subgroup analysis, which he thinks may be statistically misleading. “How would one otherwise explain that the rate difference between advanced maternal-age and non–advanced maternal-age subjects is statistically significant for gestational hypertension but not for preeclampsia without severe features?”

No study funding or disclosures are reported.

Autumn watch: how to help our hibernating animal friends
Rising Covid-19 cases in the UK may be a warning for the US
Natural sleep support: 8 science-backed ways to help you sleep soundly
What I Wish I Knew Before I Became a Doctor
Why You’re Not a Straight-A Student (& How to Become One)