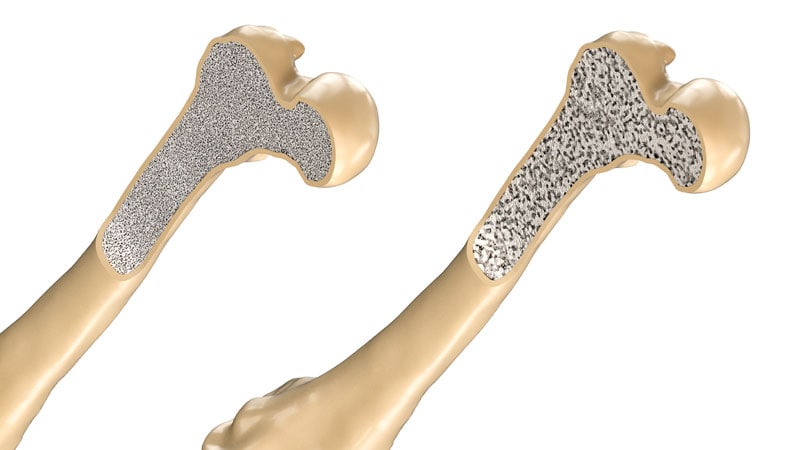 NEW ORLEANS — People with bipolar disorder – particularly men – show a significantly increased risk of osteoporosis, compared with the general population, but treatment with lithium appears to offer a significant protective effect against the bone disease, according to results from the largest study of its kind.

“Our findings emphasize that bone health should be a priority in the clinical management of bipolar disorder, and that the potential bone-protective effects of lithium should be subjected to further study — both in the context of osteoporosis and bipolar disorder,” said Soren D. Ostergaard, MD, PhD, the study’s first author and a professor in the psychosis research unit, Aarhus (Denmark) University Hospital–Psychiatry.

For the retrospective cohort study, presented at the annual meeting of the American Psychiatric Association, and also published recently in JAMA Psychiatry, the authors reviewed data on 22,912 patients treated for bipolar disorder in Denmark between 1996 and 2019, and compared each patient with 5 age- and sex-matched controls, amounting to 114,560 individuals in the general population.

Of the patients with bipolar disorder, 38.2% were treated with lithium, while 73.6% received an antipsychotic drug; 16.8% received valproate and 33.1% received lamotrigine.

With a median follow-up of 7.7 years, the incidence of osteoporosis per 1,000 person-years was 8.70 among patients with bipolar disorder, compared with an incidence of 7.84 among controls, (hazard rate ratio, 1.15).

The association of bipolar disorder with osteoporosis was notably more pronounced among males (HRR, 1.42) compared with females (HRR, 1.07).

Notably, those with bipolar disorder treated with lithium showed a significantly reduced risk of osteoporosis compared with patients not receiving lithium (HRR, 0.62), after adjustment for factors including age, sex, Charlson Comorbidity Index, use of systemic corticosteroids, use of sedative medication, and eating disorder diagnosis. No similar reductions in osteoporosis risk were observed among those treated with antipsychotics, valproate or lamotrigine.

Of note, the reduced risk of osteoporosis with lithium appeared after about year 2 of treatment (HR, 0.77) and remained steady at more than 4 years (HR, 0.76). A higher cumulative lithium dose was meanwhile associated with a greater decrease in the risk of osteoporosis (P < .001).

The results are consistent with previous smaller studies indicating that people with bipolar disorders shown an increased risk of low bone density, osteopenia, and even fracture.

The higher risk of osteoporosis in bipolar disorder may be explained by lifestyle factors, Ostergaard noted in an interview.

“It could be the depressive and manic phases in bipolar disorder, but generally speaking, both phases can lead to an unhealthy lifestyle and that’s likely what drives the association between bipolar disorder and osteoporosis,” he said. “Increases in behaviors such as smoking and alcohol consumption may be factors as well. Similar findings are seen with depression.”

While more needs to be understood, Ostergaard speculated that higher rates of such behaviors in men with bipolar disorder may explain the higher osteoporosis risk observed in men.

In general, however, the increased risk underscores the importance of raising awareness of bone health among patients with bipolar disorder, the authors concluded.

The implications of the lithium findings are trickier to determine, Ostergaard said.

“The evidence for lithium in bipolar disorder are well established, and our findings don’t really add to that,” he said. “The main thing is it suggests there might be some advantages of lithium that we’re not really aware of.”

The unique properties observed with lithium have caught the attention of some in orthopedics, and researchers with the University of Toronto — having found intriguing bone healing with lithium in preclinical rodent studies — are currently conducting a first-of-its-kind multicenter, randomized, controlled clinical trial evaluating the potential effects of lithium in the healing of bone fractures.

Diane Nam, MD, of the division of orthopedic surgery, Sunnybrook Health Sciences Centre, Toronto, and lead investigator on the study, said in an interview that “I’m not surprised by [Ostergaard’s] paper because it’s consistent with what we have observed about the positive effects on bone healing.”

Nam and associates have already established administration parameters for their clinical study, determining that optimal effects in fracture healing appear to require that lithium treatment not begin at the time of fracture, but 2 weeks afterward, when new bone is ready to be laid down at the fracture site. In their trial, low daily doses of lithium (at 300 mg) are given only for a duration of 2 weeks.

“While our current trial is intended for a healthy, nonosteoporotic adult population, we have also demonstrated in our preclinical studies that lithium is just as effective in improving fracture healing in an osteoporotic model when the timing of administration is slightly delayed,” she said. “How this is relevant and translatable in patients with bipolar disorder requires further study.”

Nam said her research team thinks that “not only will the fracture heal faster, but it will heal reliably as delayed or impaired fracture healing remains a significant orthopedic problem.”

While details are not yet available, a preliminary analysis has shown results “going in a positive direction,” enough for the team to be granted funding for the multicenter trial.

Ostergaard and Nam reported no disclosures or conflicts.

Autumn watch: how to help our hibernating animal friends
How to Choose a Medical School
Why Most Americans Don’t Want To Get The Flu Shot This Season
Daxor’s BVA-100 diagnostic blood test reduces hospital length of stay for heart failure patients
90% of US adults say the United States is experiencing a mental health crisis, CNN/KFF poll finds