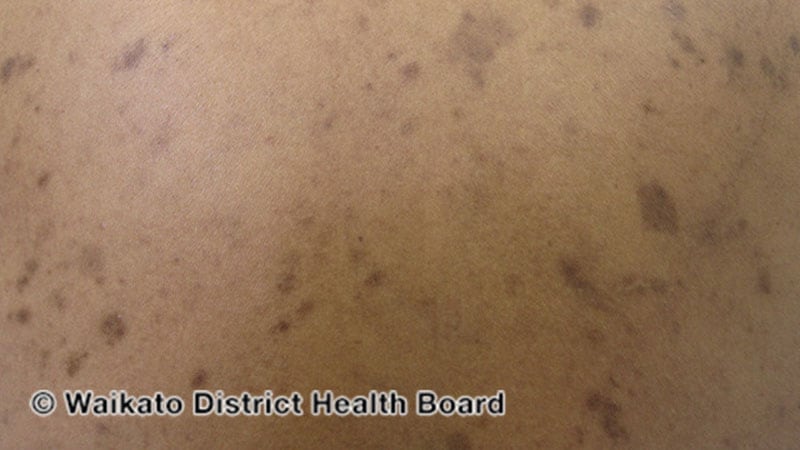 SAN DIEGO – Combining topical tyrosinase inhibitors with either a nonablative fractional laser or a fractional picosecond laser was safe and effective for treating postinflammatory hyperpigmentation (PIH) in patients with Fitzpatrick skin phototypes V and VI, results from a small retrospective case series suggest.

“Postinflammatory hyperpigmentation is a leading chief of complaint of many skin of color persons seeking a dermatologist,” Elizabeth J. Kream, MD, told this news organization in advance of the annual conference of American Society for Laser Medicine and Surgery. “I describe PIH to patients as the ‘ashes after a fire is extinguished.’ It’s the stubborn brown to gray/black spots that persist after conditions like acne and folliculitis, but it can be caused by any insult to the skin including external injury. In fact, there’s a risk of inciting PIH with lasers and energy-based devices and this risk is greater in skin of color given the greater melanin content. Unfortunately, we see patients present after visiting a med spa who were treated with the wrong devices and/or the wrong settings and they have disfiguring scarring and/or dyspigmentation.”

During an abstract session at the meeting, Kream, a dermatology resident at the University of Illinois at Chicago, discussed three patients with recalcitrant PIH and Fitzpatrick skin phototype V and VI who were treated in San Diego with a combination of topical and laser therapies. She presented the case series on behalf of coauthors Monica Boen, MD and Douglas C. Wu, MD, dermatologists who practice in San Diego.

The first patient was a 37-year-old Black female who presented for evaluation of longstanding hyperpigmentation on the face and neck determined to be PIH secondary to folliculitis on the chin and neck. She was started on 8% hydroquinone with kojic acid daily and received four treatments spaced 4-8 weeks apart with the 1,927-nm fractional nonablative diode laser. Laser settings were 5 mJ pulse energy and 5% coverage after eight passes. Triamcinolone 0.1% ointment was applied immediately after treatment and for 3 days following treatment, and the “patient experienced near complete resolution of PIH with no unexpected adverse events,” Kream said.

The second patient was a 20-year-old Black male who presented with a 3-month history of facial hyperpigmentation after suffering a laser-induced injury. He was started on a non-hydroquinone topical lightening agent and received five treatments spaced 2 weeks apart with a 1,927-nm fractional nonablative diode laser. The laser settings were 5 mJ pulse energy and 5% coverage after eight passes. The patient experienced 80%-90% resolution of his PIH with no unexpected adverse reactions.

The third patient in the series was a 39-year-old Black male who presented with a 6-month history of hyperpigmentation on his right shin and calf, secondary to minor occupational-related trauma. Treatment was initiated with a fractional 1,064-nm picosecond laser. The laser settings were 2.1 mJ per microbeam microwave pulse energy and a 450 picosecond pulse duration delivered at 2 Hz through a holographic beam splitter with a 6 x 6–mm spot size containing 101 microbeams, for an estimated coverage of 4% per pulse. Four passes were performed for each area. The endpoint was a mild erythema to several treated areas a few minutes following laser treatment. Postoperative care consisted of applying a non-hydroquinone topical lightening agent twice daily to the affected area for 1 month. Near-complete resolution of the PIH was achieved, with no unexpected adverse reactions.

“In our clinical experience, PIH can be treated with the combination of topical skin lighteners and low density, low fluence laser therapy in almost all skin types,” Kream said. “The rationale behind this combination is to treat and remove existing pigment with the laser therapy while minimizing and preventing any pigmentary recurrence with diligent topical therapy and photoprotection.”

It is important to identify the cause of PIH “because some cases are trickier than others,” such as a lichenoid process that deposits pigment “a little bit deeper into the dermis,” she said. “When selecting an appropriate laser modality for the treatment of PIH in skin types V and VI, it’s especially important to consider the mechanism of action, depth of penetration, degree of tissue damage, and the extent of disruption to the dermal-epidermal junction.”

Following the presentation, one of the session moderators, Albert Wolkerstorfer, MD, PhD, a dermatologist at Amsterdam University Medical Center, the Netherlands, emphasized the importance of proper patient selection for laser treatment of PIH. “Not every patient with PIH is adapted to treatment with the laser,” Wolkerstorfer said. “I think it’s also important to choose stable PIH, meaning you often see patients with an underlying disorder who want to get rid of the pigment. They often believe that the laser is the solution, but it often isn’t.”

During a question-and-answer session, a meeting attendee pointed out that the study lacked a control area to compare the treatment results to. “This was a retrospective case series,” Kream replied. “I’d like to see more elegant studies in the future, with a control [area],” she said.

Kream reported having no financial disclosures, Boen has no disclosures, and Wu has conducted research for many pharmaceutical and device companies. Wolkerstorfer disclosed that he has received grant or research funding from Lumenis, Novartis, and Avita Medical, and is an advisory board member for Incyte.

Hesitancy to vaccinate children associated with misinformation about vaccine safety
Global burden of liver cancer could rise by more than 55% by 2040, analysis reveals
After promising data, experts say many questions remain over an experimental Alzheimer’s drug
US suicide rates rose in 2021, reversing two years of decline
Encouraging physical fitness may be an easy way to bring eye allergies in children