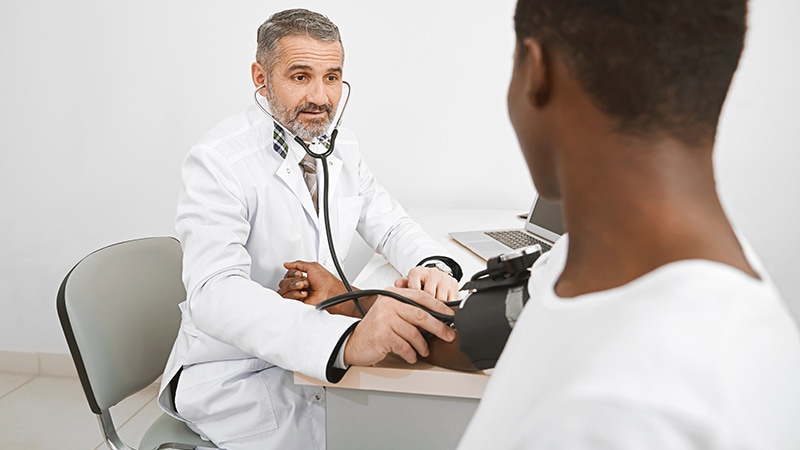 Radiofrequency renal denervation provided progressive reductions in blood pressure at 3 years in patients on antihypertensive medication but this did not translate into fewer antihypertensive drugs, new results from the SPYRAL HTN-ON MED trial show.

The number of antihypertensive drugs, however, increased in both groups from an average of two at baseline and 6 months to three at 3 years (P = .76).

The procedure appeared safe, with no renal safety events in the denervation group and only three safety events overall at 36 months. One cardiovascular death occurred 693 days after a sham procedure and one patient had a hypertensive crisis and stroke 427 days after renal denervation and was discharged in stable condition, according to results published in The Lancet.

“Given the long-term safety and efficacy of renal denervation, it may provide an alternative adjunctive treatment modality in the management of hypertension,” Felix Mahfoud, MD, Saarland University Hospital, Homburg, Germany, said during a presentation of the study at the recent American College of Cardiology (ACC) 2022 Scientific Session.

The results are specific to the Symplicity Spyral catheter, which is investigational in the United States, and may not be generalizable to other renal denervation devices, he added.

“The fact you have been able to accomplish this really is quite a feat,” said discussant Martin Leon, MD, New York-Presbyterian/Columbia University Irving Medical Center in New York City. “I would argue that the results at 36 months are at least as important as the ones at 6 months.”

He observed that one of the promises of renal denervation, however, is that it would be able to reduce patients’ drug burden with fewer drugs, and lesser doses.

“At least in this trial, there was very little effect in terms of significantly reducing the pharmacologic burden,” Leon said. “So, it would be difficult for me to be able to say to patients that receiving renal denervation will reduce the number of medications you would need to treat. In fact, it increased from two to three drugs over the course of follow-up.”

The objective of the trial was not to reduce medication burden but to get blood pressure (BP) controlled in patients with an average baseline office reading of 164.4/99.5 mm Hg, Mahfoud replied. “We have shown that office systolic blood pressure decreased by around 20 millimeters of mercury in combination with drugs, so it may be seen as an alternative to antihypertensive medication in patients who are in need of getting blood pressure control.”

Leon responded that the BP control differences are “very dramatic and certainly very important” but that the word adjunctive can be tricky. “I’m trying to understand if it’s the independent or isolated effect of the renal denervation or if it’s a sensitivity to the biological or physiologic milieux which enhances the efficacy of the adjunctive drugs, especially with the fact that over time, it looked like you had increasing effects at some distance from the initial index procedure.”

Mahfoud said that previous work has shown that renal denervation reduces plasma renin activity and aldosterone concentrations. “It’s not fully understood but I guess there are synergistic effects of denervation in combination with drugs.”

As previously reported, significant BP reductions at 6 months in SPYRAL HTN-ON provided proof of concept and helped revive enthusiasm for the procedure after failing to meet the primary endpoint in the SYMPLICITY HTN-3 trial. Results from the Global SYMPLICITY Registry have shown benefits out to 3 years, but sham controlled data have been lacking.

Medication changes were allowed beginning at 6 months; patients and physicians were unblinded at 12 months. Between 24 and 36 months, 13 patients assigned to the sham procedure crossed over to denervation treatment. Medication adherence at 3 years was 77% in the denervation group vs 93% in the sham group.

“Although renal denervation appears to effectively lower blood pressure, participants in the renal denervation group did not quite reach guideline-recommended blood pressure thresholds,” Harini Sarathy, MD, University of California, San Francisco, and Liann Abu Salman, MD, Perelman School of Medicine, University of Pennsylvania, Philadelphia, point out in an accompanying editorial. “This result could have been due to a degree of physician inertia or differential prescribing of blood pressure medications for the intervention group compared with the sham control group, wherein physicians might have considered renal denervation to be the fourth antihypertensive medication.”

The editorialists also note that nearly a third of the sham group (13 of 42) underwent renal denervation. “The differentially missing BP readings at 24 months for the sham group are a cause for concern, although the absence of any meaningful differences in results after imputation is somewhat reassuring.”

A 10 mm Hg reduction in BP after 36 months would be expected to translate to a significant reduction in cardiovascular outcomes, they say. The sustained reductions in several systolic readings also speak to the “always-on distinctiveness” that renal denervation proponents claim.

“In the stark absence of novel antihypertensive drug development, renal denervation is seemingly poised to be an effective supplement, if not an alternative, to complex antihypertensive regimens with frequent dosing schedules,” they conclude. “We look forward to results of the Expansion trial in providing more definitive answers regarding whether this translates to meaningful protection from target organ damage.”

Mahfoud observed that BP control worsened during the COVID-19 pandemic, which may have impacted BP results, but that in-person follow-up visits were still performed. Other limitations are a lack of information on patients’ exercise, diet, and smoking habits, and that blood and urine testing assessed medication adherence at discrete time points but adherence over an extended period of time is uncertain.

US sees increase in respiratory infections that can lead to paralysis in children, CDC data shows
Less screen time and more physical activity may improve executive function in toddlers
Why You’re Not a Straight-A Student (& How to Become One)
Trans-auricular VNS ‘Very Clever’ for Parkinson’s Disease
JAMA Devotes Special Issue to Gun Violence