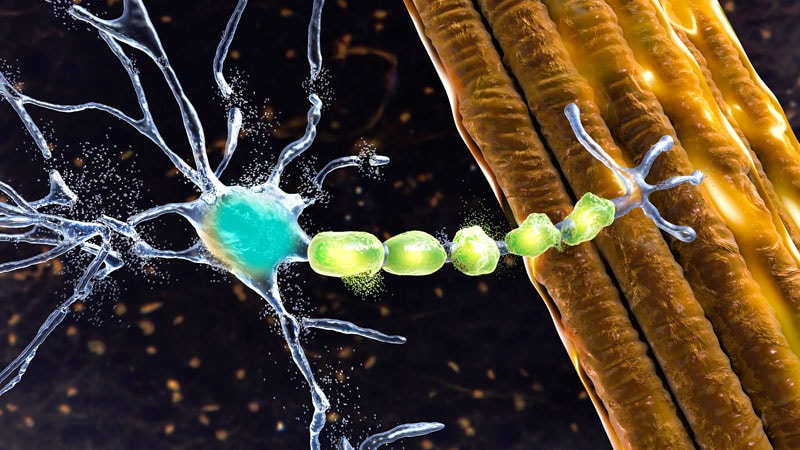 This article was originally published in Spanish on Univadis.

Amyotrophic lateral sclerosis (ALS) is a neurodegenerative disease affecting motor neurons from the cortex, brain stem, and spinal cord. As a result of this disease, motor neurons gradually decrease functioning until they die, which causes progressive and fatal muscular paralysis of the patient. ALS is therefore the most severe motor neuron disease.

Its diagnosis is based on the presence of clinical symptoms such as difficulty walking or carrying out normal daily activities; stumbling and falling; weakness in the legs, feet, or ankles; weakness or clumsiness of the hands; difficulty talking or swallowing; muscle cramps; and spasms in the arms, shoulders, and tongue. These manifestations appear when motor neuron degeneration is in an advanced stage, therefore it is already too late to start a neuroprotective treatment to slow the progression of this incurable disease.

There is a great need to identify biomarkers that would allow for an early diagnosis of ALS. For this reason, researchers from the Autonomous University of Barcelona (UAB) in Spain, Mar Hospital, and Bellvitge University Hospital, all located in Barcelona, Spain, performed skin biopsies on individuals with this disease to analyze their dermis in search of biomarkers that could potentially become tools for early diagnosis.

The results of this study led by Mireia Herrando-Grabulosa, MD, PhD, a postdoctoral researcher, and Xavier Navarro, MD, PhD, professor of physiology, both at the Neurosciences Institute at UAB, and Miguel Ángel Rubio, MD, ALS Unit Coordinator at Mar Hospital, were published in the journal Cells in January 2022.

The TDP-43 protein has multiple functions coded by the TARDBP gene. In healthy motor neurons of the brain and spinal cord, this protein is found within the nucleus. However, when these central nervous system (CNS) cells undergo the degenerative processes caused by ALS, this protein is released into the cytoplasm in 97% of individuals with this disorder. It is therefore a marker for this disease. The problem is that conducting biopsies of the CNS to monitor for the possible appearance and progression of the disease is impractical.

To examine the possible presence of this ALS skin biomarker, medical professionals participating in this project conducted a retrospective study with a group of 44 individuals (22 women and 22 men with an average age of 66 years) who had previously been diagnosed with ALS at the ALS Units of Mar Hospital and Bellvitge Hospital. The results of this group were compared with those obtained in the healthy control group, which was composed of 10 patients (6 women and 4 men with an average age of 59 years) with no signs, symptoms, or history of neurological disease and with those of the 10 individuals (5 with Parkinson’s disease and 5 with multiple sclerosis) from the neurological control group. All underwent a biopsy of the dermis of the distal third of the leg.

Researchers found that TDP-43 protein had also left the cell nucleus in a significant number of cells of the dermis, the fibroblasts, of ALS patients, while in the samples of the individuals of the healthy and neurological control groups, this protein was found inside the nucleus in almost all cells. Concretely, this anomaly occurred in almost one of every four cells (24.1%) of the dermis tissue of patients with ALS.

“We have found that one biomarker, TDP-43 protein, which functions as a disease fingerprint in the nervous system of individuals with ALS, is also present in the skin,” stated Rubio. “Additionally, we have been able to quantify it and determine the theoretical cutoff point to be able to issue a diagnosis in certain cases.”

Implications and Next Steps

These results open a promising pathway to allow for the early diagnosis of ALS, “since it is very reasonable to assume that TDP-43 protein is present in the cytoplasm of fibroblasts of the dermis in presymptomatic stages, before initial motor manifestations appear, which justifies its possibly significant diagnostic relevance in those individuals with a family history of ALS and who have gene mutations that predispose them to develop the disease, or in cases of difficult diagnosis,” explained Rubio. However, it will not be a tool that can be used in short-term clinical practice. “New studies are needed, with more patients, to certify that this new marker can be used to advance in the diagnosis of the disease,” he concluded.

This work was financed by the RTI2018-096386-B-I00 project of the Ministry of Science, Innovation, and Universities; the Spanish Research Agency; CIBERNED (Network Center for Biomedical Research in Neurodegenerative Diseases, CB06/05/1105) projects; and TERCEL (Cell Therapy Network, RD16/0011/0014) of the Spanish Carlos III Health Institute. The authors have disclosed no relevant financial relationships.