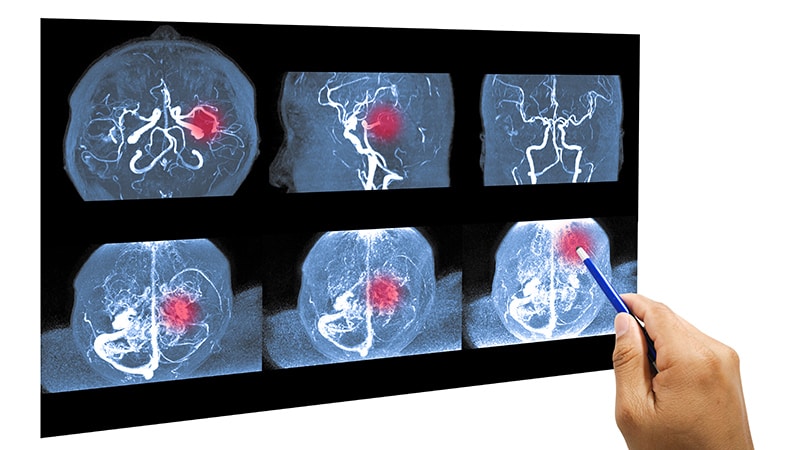 Many strategies widely considered “standard care” for managing spontaneous intracerebral hemorrhage (ICH) are not as effective as previously thought and are no longer recommended in updated guidelines from the American Heart Association (AHA)/American Stroke Association (ASA).

Compression stockings, antiseizure medication, and steroid treatment are among the treatments with uncertain effectiveness, the writing group says.

The 2022 Guideline for the Management of Patients With Spontaneous ICH was published online May 17 in Stroke. The 80-page document contains major changes and refinements to the 2015 guideline on ICH management.

“Advances have been made in an array of fields related to ICH, including the organization of regional health care systems, reversal of the negative effects of blood thinners, minimally invasive surgical procedures and the underlying disease in small blood vessels,” Steven M. Greenberg, MD, PhD, chair of the guideline writing group with Harvard Medical School and Massachusetts General Hospital, Boston, said in a news release.

“We’ve updated sections across the board. There’s probably no area that went untouched with some tweaking and new evidence added that led to some changes in level of evidence or strength of a recommendation,” Greenberg added in an interview with theheart.org | Medscape Cardiology.

Among the key updates are changes to some “time-honored” treatments that continue to be used with some “regularity” for patients with ICH, yet appear to confer either no benefit or harm, Greenberg said.

For example, for emergency or critical care treatment of ICH, prophylactic corticosteroids or continuous hyperosmolar therapy is not recommended, because it appears to have no benefit for outcome, while use of platelet transfusions outside the setting of emergency surgery or severe thrombocytopenia appears to worsen outcome, the authors say.

Use of graduated knee- or thigh-high compression stockings alone is not an effective prophylactic therapy for prevention of deep vein thrombosis (DVT). Instead, intermittent pneumatic compression (IPC) starting on the day of diagnosis is now recommended for DVT prophylaxis.

“This is an area where we still have a lot of exploration to do. It is unclear whether even specialized compression devices reduce the risks of deep vein thrombosis or improve the overall health of people with a brain bleed,” Greenberg said in the release.

The new guidance advises against use of antiseizure or antidepressant medications for ICH patients in whom there is no evidence of seizures or depression.

In clinical trials, antiseizure medication did not contribute to improvements in functionality or long-term seizure control, and the use of antidepressants increased the chance of bone fractures, the authors say.

The guideline also provides updated recommendations for acute reversal of anticoagulation after ICH. It highlights the use of protein complex concentrate for reversal of vitamin K antagonists, such as warfarin; idarucizumab for reversal of the thrombin inhibitor dabigatran; and andexanet alfa for reversal of factor Xa inhibitors, such as rivaroxaban, apixaban, and edoxaban.

It also notes that minimally invasive approaches for hematoma evacuation, compared with medical management alone‚ have been shown to reduce mortality.

For patients with cerebellar hemorrhage, indications for immediate surgical evacuation with or without an external ventricular drain to reduce mortality now include larger volume (>15 mL) in addition to previously recommended indications of neurologic deterioration, brainstem compression, and hydrocephalus, the authors note.

However, a “major knowledge gap is whether we can improve functional outcome with hematoma evacuation,” Greenberg told theheart.org | Medscape Cardiology.

For rehabilitation after ICH, the guideline reinforces the importance of having a multidisciplinary team to develop a comprehensive plan for recovery.

Starting rehabilitation activities such as stretching and functional task training may be considered 24 to 48 hours following mild or moderate ICH. However, early aggressive mobilization within the first 24 hours has been linked to an increased risk of death within 14 days after an ICH, the guideline says.

Knowledge gaps include how soon it’s safe to return to work, drive, and participate in other social engagements. Recommendations on sexual activity and exercise levels that are safe after a stroke are also needed.

“People need additional help with these lifestyle changes, whether it’s moving around more, curbing their alcohol use, or eating healthier foods. This all happens after they leave the hospital, and we need to be sure we are empowering families with the information they may need to be properly supportive,” Greenberg says in the release.

The guideline points to the patient’s home caregiver as a “key and sometimes overlooked” member of the care team. It recommends psychosocial education, practical support, and training for the caregiver to improve the patient’s balance, activity level, and overall quality of life.

The guideline also suggests there may be an opportunity to prevent ICH in some people through neuroimaging markers.

While neuroimaging is not routinely performed as a part of risk stratification for primary ICH risk, damage to small blood vessels that is associated with ICH may be evident on MRI that could signal future ICH risk, the guideline says.

“We added to the guidelines for the first time a section on mostly imaging markers of risk for having a first-ever hemorrhage,” Greenberg told theheart.org | Medscape Cardiology.

“We believe the wide range of knowledge set forth in the new guideline will translate into meaningful improvements in ICH care,” Greenberg adds in the release.

This research had no commercial funding. Greenberg has disclosed no relevant financial relationships. A complete list of disclosures for the guideline group is available with the original article.