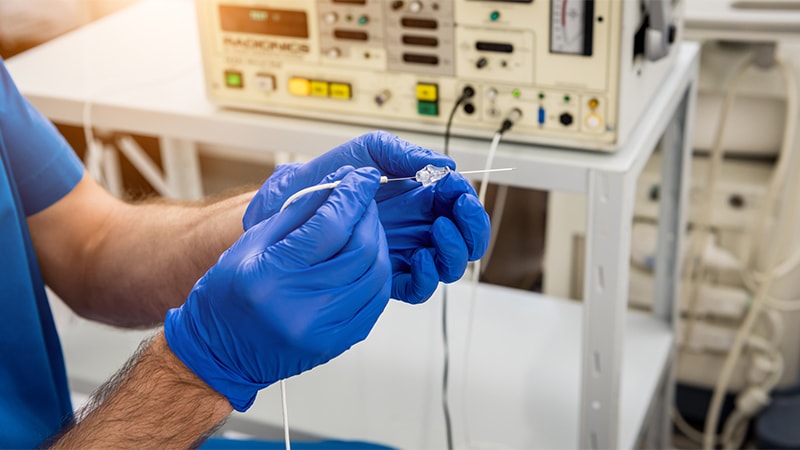 Ventricular tachycardia (VT) ablation should be considered after the first implantable cardioverter defibrillator (ICD) shock in patients with ischemic or nonischemic cardiomyopathy, the PARTITA trial suggests.

After a first appropriate ICD shock, the primary composite endpoint of all-cause death or hospitalization for worsening heart failure occurred over 2 years of follow-up in 4.3% of 24 patients who underwent VT ablation within 2 months compared with 41.7% of 24 patients who received ablation only after an electrical storm (intention to treat, hazard ratio, 0.11; P = .034).

“This is something extraordinary for us to be able to prove in a prospective way that ablation — really by decreasing the occurrence of VT — impacts importantly on the further outcome of the patient,” Paolo Della Bella, MD, San Raffaele Hospital, Milan, Italy said during the recent American College of Cardiology (ACC) 2022 Scientific Session. The data were also published simultaneously in the journal Circulation.

He noted that a recent global consensus statement recommends VT ablation in people with structural heart disease and recurrent VT episodes causing ICD interventions, but that the optimal timing of VT ablation and its prognostic effects are still open questions.

PARTITA investigators at 16 European centers enrolled 517 patients with ischemic and nonischemic cardiomyopathy and a primary or secondary prevention indication for an ICD. During a median 2.4 years of follow-up, 48% had any VT episode and 30% had sustained VTs but only 56 patients (11%) received a first appropriate shock for VT.

These 56 patients were then randomly assigned in the second phase of the study to VT ablation within 2 months of ICD shock or to continued standard therapy without ablation until an arrhythmic storm. Patients were followed for 2 years after randomization with remote home monitoring and in-hospital visits. Amiodarone (Cordarone, Pacerone) was allowed only as a bridge to ablation after a VT storm.

Five patients in the ablation group did not undergo ablation (patient refusal) and 1 in the standard therapy group underwent ablation 9 months after randomization because of an electrical storm.

The incidence of patients treated with ICD shocks was much lower than expected (about 10% at 3 years) and the study protocol was amended to include an adaptive design for the randomized phase using a Bayesian approach.

The study was stopped early after the first interim analysis indicated a 99.9% posterior probability of superiority of early ablation over standard treatment for the primary endpoint, Della Bella said.

Any anti-tachycardia pacing (ATP) and ATP leading to VT termination were found to be strong predictors of subsequent ICD shock. It was estimated that every successfully delivered ATP increased the risk for subsequent shock by 4%.

During a discussion of the results, Eugene Chung, MD, University of Michigan, Ann Arbor, congratulated the researchers on completing one of the few prospective studies of VT ablation and ICD shock, and highlighted recent data from the PRAETORIAN trial showing that ATP can accelerate arrhythmias.

Della Bella said he is in favor of a pre-shock approach to ablation and pointed out that 85% of patients who received shock had multiple ATP. The aim of future studies should be to determine the “magic threshold,” if any exists, for the number of ATP treatments that would prompt ablation.

The study was limited by the small number of randomized patients and inclusion of only those with ischemic and nonischemic cardiomyopathy. The rate of amiodarone therapy was very low but was prescribed in cases of atrial arrhythmias, which might have affected the natural history of VT episodes and ICD therapy, Della Bella said. The relatively small number of catheter ablations also does not allow for conclusions regarding safety.

“These findings warrant further adequately powered clinical trials to prove a net benefit of VT ablation after a first ICD shock over alternative timings and strategies,” the authors conclude.

Della Bella is a consultant for Abbott and Biosense and has received research grants from Abbott, Biosense, Biotronik, and Boston Scientific. The study was funded by grants from Biotronik.