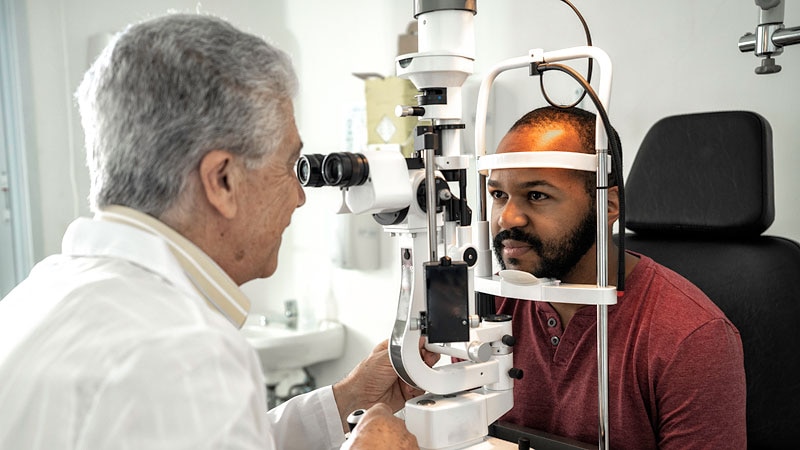 DENVER, Colorado — White, non-Hispanic people get more injections than people of other races and ethnicities to treat neovascular age-related macular degeneration (nAMD), according to an analysis of a large database analysis.

Black, Asian, and Hispanic people in the study were more likely than White people to receive “insufficient” treatment, according to the definition used by the researchers. However, Black and Asian patients did not appear to fare worse in visual acuity.

Previous studies have shown that real-world outcomes with intravitreal injections of anti-vascular endothelial growth factor (VEGF) drugs to treat nAMD have fallen short of the results seen in clinical trials. In general, patients in these real-world trials have had better visual acuity when they got more injections.

With its records on 2.5 million eyes from clinical practices, the American Academy of Ophthalmology (AAO) IRIS Registry offered the potential to find more detailed associations that might not surface in datasets with less statistical power.

“Understanding the relationships between different patterns for management of neovascular AMD, the baseline patient characteristics, and their impact on visual outcomes can help us identify gaps in care leading to suboptimal outcomes,” said Anita Barikian, MD, from East Florida Eye Institute in Stuart, Florida.

Here at the Association for Research in Vision and Ophthalmology (ARVO) 2022 Annual Meeting, she presented an analysis of nAMD treatments and outcomes found in the IRIS registry.

The researchers zeroed in on treatment-naive eyes at least 55 years of age with best-corrected visual acuity (BCVA) of at least 20/400 at the index date and a diagnosis of nAMD. They excluded eyes with other retinal diseases and eyes that did not receive anti-VEGF treatment within three months of diagnosis.

The differences were statistically significant (P < .001).

One possible explanation for the discrepancy could be a difference in susceptibility to the disease, said session moderator Maureen Maguire, PhD, a senior biostatistician at the Jaeb Center for Health Research in Tampa, Florida.

“The incidence of neovascular AMD in African Americans is very low,” she told Medscape Medical News. “It may be that the correct diagnosis of neovascular AMD was not made for these patients and they received fewer treatments because they have a different retinal condition. It is hard to tell from the data.”

Researchers haven’t figured out why the incidence of nAMD is lower for Black people, though differences in retinal pigmentation are one consideration, Maguire said. “African Americans do get the early stages of AMD, but are much less likely to convert to the later stages. Both of the late forms are much more rare in African Americans than the Caucasian populations.”

Hispanic people are “intermediate” between Black and White people in their incidence of nAMD, Maguire said.

Race and ethnicity were not the only factors that reduced the probability of getting sufficient treatment. The odds were lower for people at least 85 years old, those with a baseline BCVA better than 20/40 or worse than 20/200, those treated by someone other than a retina specialist, and those insured by Medicaid (rather than Medicare or commercial insurance.)

The biggest improvements in visual acuity were associated with being younger, having a worse baseline BCVA, and having Medicare or commercial insurance.

Responding to a question from the audience, Barikian acknowledged that nAMD treatment must be personalized and that some patients need more injections than others.

“The IRIS Registry can certainly provide high numbers, which can be very good,” said Maguire. “But sometimes we don’t understand some of the possibly confounding factors such as comorbidities or details of the actual treatment patterns.”

Barikian and Maguire have disclosed no relevant financial relationships.

Association for Research in Vision and Ophthalmology (ARVO) 2022 Annual Meeting. Presented May 4, 2022.

Laird Harrison writes about science, health, and culture. His work has appeared in national magazines, in newspapers, on public radio and on websites. He is at work on a novel about alternate realities in physics. Harrison teaches writing at the Writers Grotto. Visit him at www. lairdharrison.com or follow him on  Twitter: @LairdH